Obesity is generally defined as a body mass index greater than or equal to 30 kg/m2. As the units suggest, BMI is calculated by dividing weight in kilograms by the square of height in meters. A simple BMI calculator, allowing input in pounds and inches or metric units is available from the Centers for Disease Control (CDC). The CDC began tracking the prevalence of obesity in the 1980s in a handful of states and by 1994 was reporting the prevalence for all 50 states. As the CDC’s figures show, the change from 1984 to 2010 is startling: 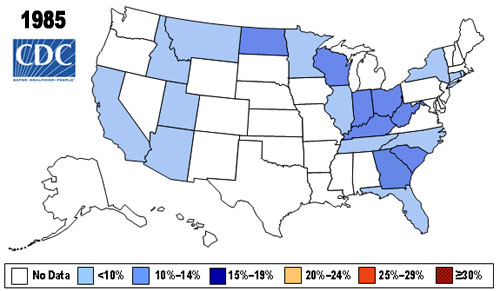 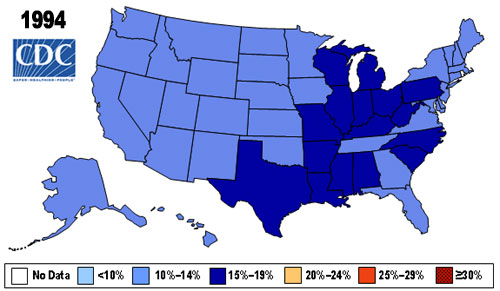 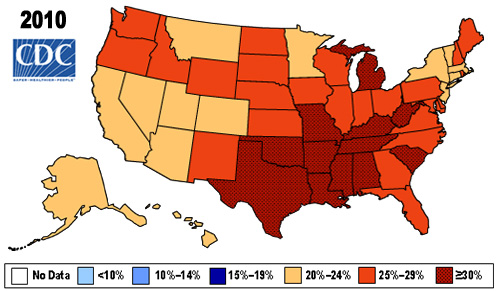 Recent research by Kolmos and Brabec has suggested that the trend of increasing BMIs in the US started long before the 1980s, however. These authors make the argument that by using BMIs from the 1980s as a reference, the CDC is misleading us into believing those BMIs are worthwhile goals. As the authors explain in a summary of their research, Brabec and Kolmos conclude:

The fact that the obesity epidemic started earlier than hitherto thought also implies that the current weight and BMI standards published by the Centre for Disease Control are inaccurate, i.e., not ideal for gauging the true extent of the obesity epidemic especially among children and youth. Reference charts are supposed to reflect what is “normal” within the society. In this case, however, they do not do so, insofar as they incorporate BMI values obtained at a time when the transition to post-industrial weights was already under way, i.e., at a time when obesity was already more widespread than in historical times. That was an arbitrary choice. The current standards are thereby misleading as they suggest that the weights obtained in the midst of the obesity pandemic were actually normal ones. As a consequence, many overweight and obese children and youth are misled into believing that their weight is normal – when it is not.

We believe the authors have a valid point that the trend toward greater BMI began long before the 1980s. However, the CDC’s data, and their choice of ideal body weight for which to strive, need not be erroneous because of this. The question is, and has always been, at what point does BMI become unhealthy? It is quite possible that while BMIs, and median BMI values in particular, began increasing as early as the 1880s, nevertheless the vast majority of people may not have reached unhealthy BMI levels until much later. The CDC’s BMI cut-offs for underweight, ideal weight, overweight, and obese were selected based on evidence regarding the health consequences of those values. It is quite possible that many people in the 1880s were underweight by such evidence-based standards.

There is little doubt, however, that the trend has now led to a great many people in the US weighing more than is healthy. Brabec and Komlos list among factors contributing to this trend: major labor-saving technological changes of the 20th century; the industrial processing of food and the onslaught of fast-food restaurants; the growing culture of consumption; an increasing dependence on automobiles; the introduction of radio and television; the increasing participation of women in the work force; and the information technology revolution.

The contribution of women working more commonly outside the home to the trend of increasing BMI may not be obvious, but if one considers how little time those of us with jobs outside the home have (or choose to make) for daily exercise, it may seem plausible that adding more people to this predicament (i.e., more women) may well increase overall obesity levels. The other contributing factors in the list seem clear.

Since obesity in the US is the result of lifestyle constraints as well as personal choices, it seems clear that both the private and public sectors will have to play a role if the so-called “obesity epidemic” is to be curbed. This may have already begun, as more employers are discovering the value of a healthy workforce and initiating wellness programs for employees. For its part the CDC has made some effort to develop and promote workplace health programs. However, obesity reduction efforts are of limited value unless people willingly participate in them. Education, including a motivational component, should be a focus of any such program.